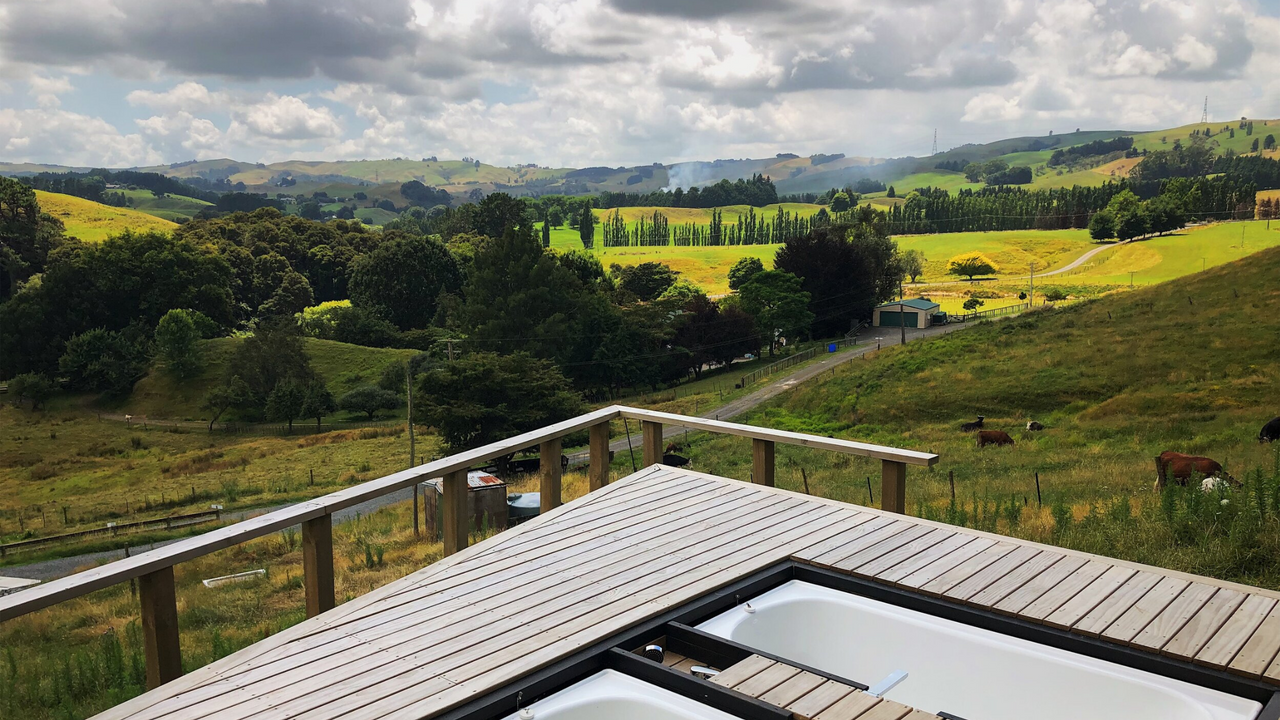 On the day when my heart opened up, I was completely naked, standing outdoors and dripping wet with bathwater runoff from the tub sunk into a roofless terrace, unaware that our host had tip-toed up the hill behind me so as not to be heard, to deliver breakfast.

The house overlooked what may as well have been a garden. The eve’s cool was adamic enough. The breeze, my breath, whispering the unnamable in tandem.

And in that moment it made sense to me: the way some have dared to speak of God as matron.

They aren’t trying to get struck down by lightening.

They’ve just experienced a kind of heaven that can only be described as umbilical.

Let us have our metaphors. They are not all affronts. Not all a storming of castles.

And so there, at home in his garden—her womb—I called my friend and thanked him for teaching me how to love.

That was before my wife and I drove south, past Mount Doom, to Wellington. Through Middle Earth and back again, commiserating with David’s realization that those pennies we could have spared might have added up to something by now.

But ready to spend them all on the treasure buried in this field.

I will never forget Waitangi Day, or witnessing the haka that morning, or the ceremonial breakfast where Jacinda served eggs and sausage only a few short months before a man in hell opened fire on more innocents, as lost as they were to his tired crusade.

On this morning, though, there was no belittling. Neither Maori nor Crown made a mockery of the other. No one had pocketed stones to throw.

The sun rose over the treaty grounds. Over Motumaire Island.

The next day, I stood in Rowan’s kitchen and vowed not to bury myself again.

The me that had come to surface when the dust that I’d pummeled myself into began to reassemble into the shape of man.

When I got back home, I didn’t want to let go of that feeling, but as I’ve already mentioned: trying to hold onto it seems like a surefire guarantee that it will slip through your fingers.

I do not need to go searching for the reason that I keep on discovering myself back up and swirling amongst the clouds, micromanaging.

All our will-be threats about anything that anyone could possibly say, at the mercy of merciless others who are, in fact, us, ready to pounce. Ready to tear down. Ready to kill our connected selves. Ready to mock men who can’t live up to the standard and women with voices and elephants and donkeys and sects and sexes and information so instantaneously spread that everything anyone believes to be true becomes little more than hyperbole and hypotheticals bouncing back and forth from one angry argument to the next until the crux of it vanishes completely, and all we’re doing is clawing and biting and tearing out one another’s (our own) hair.

A friend of mine took a death-trip, and wrote about the way that God revealed himself as a concrete slab that he was to build his house upon. He said that—were it not for this cornerstone—he’d stumble all over everything and out into nothingness.

That’s a lot of what fear feels like—paralysis and shame and nothingness and nowhereness. I’m tired of it all.

I refuse to live here anymore. I can’t do it anymore.

The truth really does set you free. For so long, I’ve read those read words with next to no here and now significance - only big, objective, futuristic, ethereal, dispensationalist eternal-life-insurance truth.

Perhaps it is that, but if the kingdom of heaven is not also now, then what’s the point? It’s got to be right now.

It is finished and the kingdom is here, but we decided to dominate instead of cultivate.

We decided to use whatever is in our power to make subject to rather than do all that we can to live peaceably with all people.

I want to be an active participant in the here and now, even if it is not quite the not yet.

And the truth is, some of me is dying. I hope the dying parts end up being like the seed that had to experience the same in order to bring forth new life.

Part of this means admitting to and shedding my messiah complex.

This art inspires life but it pulls weight back with the current, and:

i tried so hard to be all things to all men

amen, i tried not to fragment, but here i am

in pieces, you said, “that’s not what i meant

by ‘insofar as it is within your means.’”

how do you find yourself again?

the boy buried beneath

became an amalgamation of an algorithm

i got so tired of writing about fear and shame

insofar as they became self-fulfilling prophecy

I want to be an artist again.

Even the savior sweat blood over having to drink his title from that cup. What made me think that I could swallow it?

You are the light of the world.

Do not cover your glow beneath bushels like comparison and success and her job and his wealth and what you could have done and what they might think of you.

You are the salt of the earth.

Do not be anything other than the flavor that you have been made to be, you course crystal, or you sulfuric, black lava salt. You briny sea salt, or you pickling preserver. You can spend a lifetime wishing your salmon-pink hue were a volcanic Hawaiian charcoal, but you were made with your own flavor to taste by those with a palette for who you are.

Let the rest be, and rest.

Thank you very much for reading my words. You can, of course, read them for free, because you’re worth more than what I stand to profit off of you, and I take joy in sharing them as such.

If you feel at all inclined to support my work—on either a one-time or ongoing basis—I would be honored if you would check out The Fraction Club, here, where you’ll receive access to unreleased writing – including poetry, essays and articles – video broadcasts, audio podcasts, an exclusive webstore, the private online Discord community, and more.