On distilling the swarm 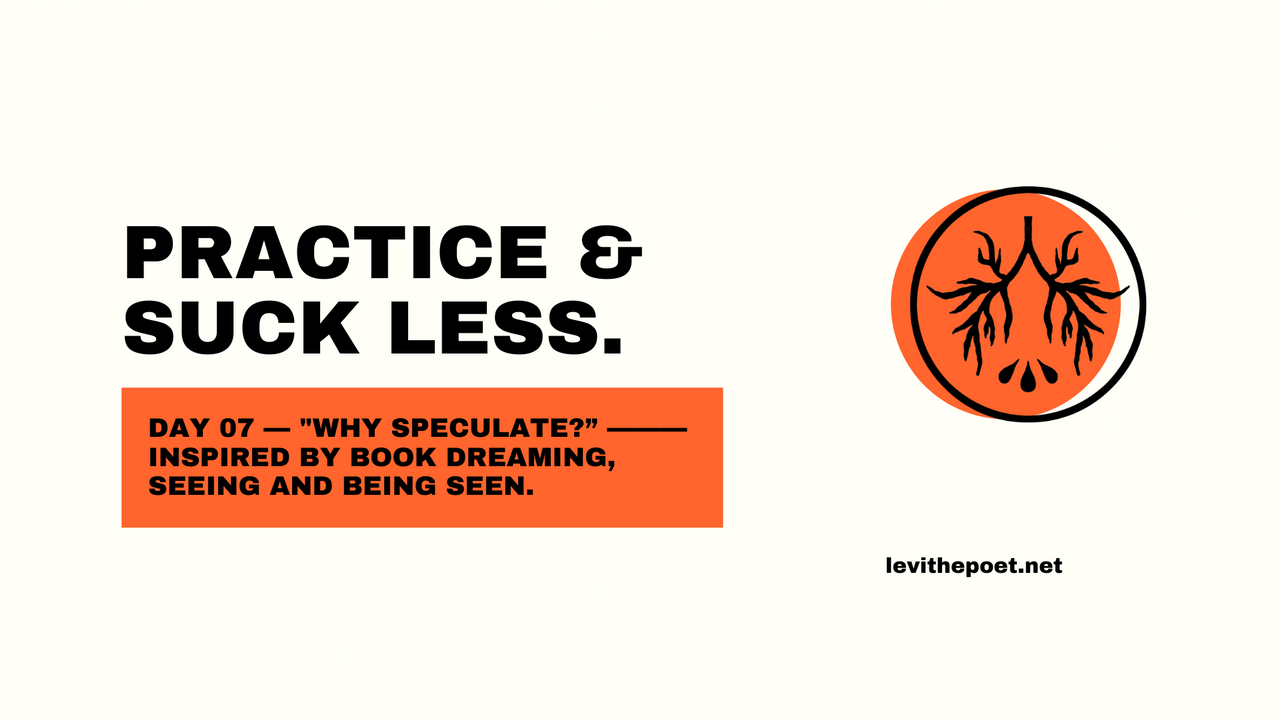 I've been working on — not exactly a book pitch — but an accumulation of ideas for a potential book. One of the things that I've had to do during that process is an audience analysis.

Like, who are you people and what do you come to my writing for?

I wrote down some of my own observations made throughout the years. Then I thought, "Why speculate?" I'll ask my Fraction Club members why they stick around. What they gravitate toward, expect or find resonant in my writing.

What do you come to me for?

Most of the feedback has been about truth-telling, transparency, not caring much for pretense — realness. While I'm thankful for all of those responses, what struck me as ironic this morning, on my walk with Frank, is that those are all of the things that I feel as though I am not good at most of the time, and my not-goodness at them becomes the source of a lot of heaviness in my life.

They're actually the things that I'm working on the most in my life right now.

It's where my writing about truth-telling and pandering have come from. It's why I shared Justin McRobert's post about "losing every single stupid game that I'm not supposed to play for the sake of my better self," or this one:

It's why, a couple of days ago, I wrote about being Clark Kent: ready to fly, opting to hide, putting on your disguise for this Daily Planet.

And so throughout my time as an artist and a writer and an articulator of ideas, I have — frankly — struggled not to feel bad about that feedback.

Certainly, to be a truth-teller is what I strive to be. And perhaps the fruit of that striving is best seen in my work, when I finally become brave enough to hit "publish."

Perhaps I should say that I often find the truth while writing, especially if and when I am able to move out of my head trip and into my heart, or my body, which is really what these "practice and suck less" days are about. Writing, sure, but more-so: showing up and allowing the truth to come out. As the saying goes, people read to know they're not alone. I often write for that reason, but more often, I write to figure out what in the actual hell it is that I believe, or have to say.

Writing distills the swarm for me.

When I am dishonest with myself, I feel it in my body. My mind feels like it's constricting. There's weird, anxious energy in my limbs. Over the years, I've learned that a lot of mental health problems can be sorted better through honest alignment with oneself than with a pill (or both).

"The truth will set you free."

I learned about that truth with a capitol "T" — objective and personified. Frankly, I still believe in that Umbrella over everything, but I am learning that there is a subjective kind of surrender that each of us, as individual worlds, has to do as unto our own experience, as well.

It's difficult enough in and of itself as a person whose coping mechanism has so often been conformity for the sake of pleasing the proverbial you, let alone in a faith tradition that so often posits unity as synonymous with uniformity.

It's a stumbling sort of process for me, especially publicly. Especially when I start to think that I'm the moon instead of the finger pointing at it. I've got to learn to be misunderstood. One of the "whys" I received from a member — Kenji — brought tears to my eyes:

Part of it is feeling like we both find ourselves haunted by Jesus of Nazareth among friends who understandably don't want anything to do with Him anymore. Part of it is feeling like we are in similar situations when it comes to the difficulty and importance of being honest as public (or in my case public-ish) figures in the Christian and post-Christian worlds (both of which are very unkind worlds, in my honest opinion).

It reminds me of the line from As Far As The East Is From (The Naval To) The West: "God won't leave me alone."

It's a double-entendre of sorts — mostly a gift, sometimes an annoyance.

I have always encouraged others to be honest, knowing that it is very easy for me to reciprocate their honesty with compassion, and love, and a sense of everything is okay-ness. Fascinating how it is always more difficult to extend that acceptance toward ourselves.

We're most passionate about giving to others what we struggle to receive, and we're most critical of others about the things that — consciously or not — we dislike about ourselves.

We are mirrors of one another.

How do we move beyond the reflection we see, becoming doers, changed, instead of just hearers, unmoved? Surely not by suppressing — or glossing over — the person looking back at us.

Sometimes I think it's more difficult for me to be honest with myself than it is to be honest with God. And yet, in this weirdly symbiotic relationship that we have with the Divine Presence, Confessors like Augustine write:

"How can you draw close to God when you are so far from your own self?"

Frankly, there is a lot of hard work and a lot of mistakes to be made in the process of uncovering whoever it is that you are.

During a recent Coffee Date — my one on one poetry and writing sessions — I spoke with a student who is trying to process her personal doubt and deconstruction through her poetry. There are moments in her pieces where you can tell that she's holding back, and the only thing that I could think to encourage her with was that she could be free to be as "true" and honest as she needed to be in that notebook. This meant, in her case, as blasphemous and profane as she needed to be in that notebook. Because if all that she had learned about what God knows of her (everything) was true, then she may as well look at an honest reflection of herself in the mirror of her own writing.

That's the only way you're going to get to the other side of that, anyhow. It's not going to happen through ignoring the calluses that have built up on top of the person you really are: beloved of God. You've got to pumice-stone those layers away.

When it comes to my own writing, I know when I'm allowing the truth to speak and when I'm getting caught up inside of a head-trip where the language might be pretty, but the soil is rocky, and the flowers wilt before I can even start the next stanza.

Brian Macdonald — co-host of the You Are A Storyteller podcast — says that, "If it doesn't scare you a little bit to write it down [or put it out], you haven't found it yet."

So, sometimes I feel more like a con-artist than a real one when someone "appreciates my honesty," but there really is something about the way that art reveals the heart — something that has been so stifled in my brain's negative takeaways of an overemphasis on wickedness and deceit that allowing it to speak has often felt more like a lie than a testament to the subjective sort of reality about the God who made and loves what makes you you — the one who must learn to acknowledge this truth about your fearfully and wonderfully made-ness.

It's something you can feel. An expression that words can't express, no matter how many words I use to express it.

Anyway, just what in the world are you images of God doing here?