We do not know what we do to one another 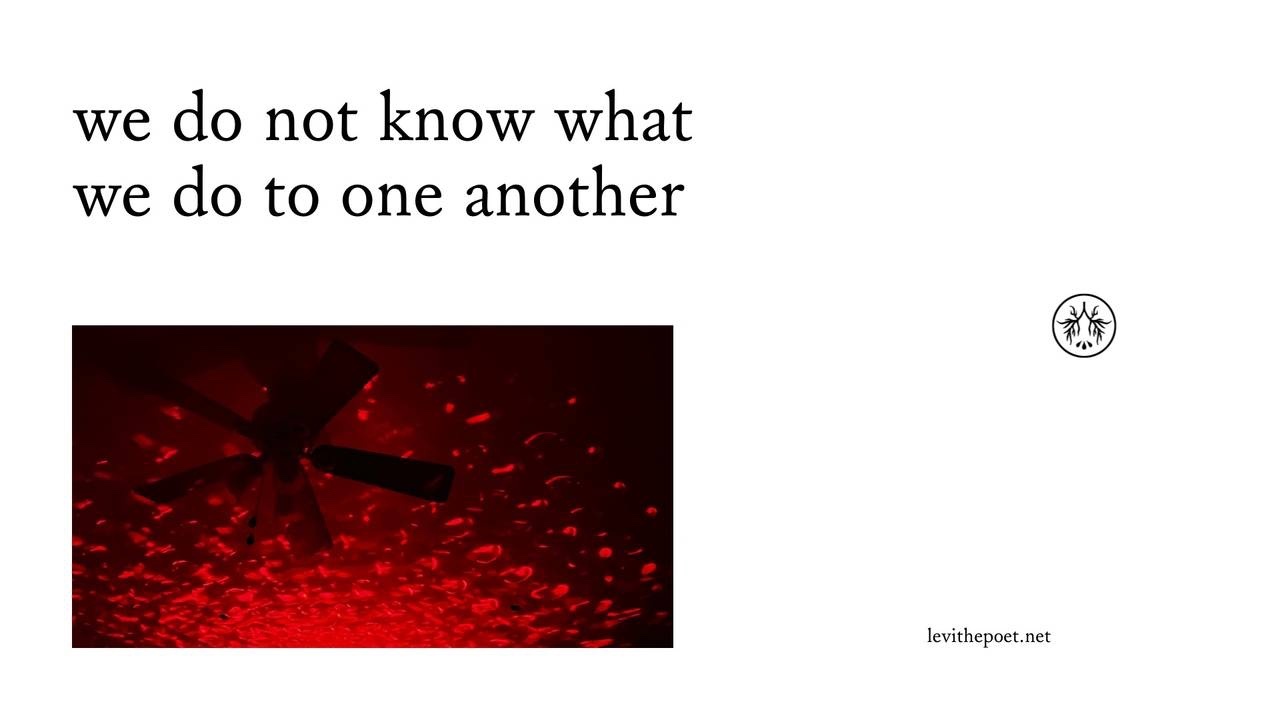 It is 2:01 am and I am wide awake because I drank two enormous cups of oolong tea while playing a Monopoly card game thinking that oolong meant “does not have caffeine.” I am in a room at my friend’s house and he has a light that makes waves and stars on the ceiling and you can change their colors so I got rid of the stars and made the waves red.

It’s kind of like one of those ads for apps that are always in my Instagram feed promoting: “It’s Like Being On Drugs But Not On Drugs!” with some NFT gorilla with twirly eyes because everything is a mock-psilocybin product now that Legalize Nature is finally making headway in the world.

I want to be a compassionate man. I don’t know how possible that is to force. Compassion — like love or gentleness — is expansive and uncontrollable.

I’ve been thinking about purity culture. It’s a bandwagon I haven’t wanted to jump on but this is the journey that circles back to compassion as I lay here looking at all the red waves on the ceiling.

I was thinking how I used to speak for XXXchurch and I would tell people stories about the boy me who would stand in front of the mirror and flip himself off and curse his image and say things to his reflection like, “you’re going to go to hell,” when he would “fail sexually.” I was thinking about being a twelve or thirteen or fourteen or fifteen year old who thought about killing himself because he masturbated.

And I got so angry thinking about the centrality of shame in the story so many people get told about good news, and how that story remains entirely reliant upon the continual perpetuation of it.

Do you know that Love can handle Itself well enough on its own?

Do you know that Love is the only thing in (and out) of this world powerful enough to actually enable what it asks of us?

Do you know that Love doesn’t function like a businessman who has to create a problem to sell you a solution?

And I start to hate and resent and blame and tear the whole damn house down inside of my mind, where all the rage starts to surface.

And for what it’s worth: it should surface. It should. We’re not meant to push everything down as far as we do. Get it out. Be careful how, or with whom. Protect yourself and others.

Love others as you love yourself.

Love yourself so that you have the capacity to love others.

But get it out.

The thing about getting it out, is then it’s out. Then it’s clear and you can look at it and be set free.

Somehow, beyond all the fickle and codependent versions I’ve been sold and sold to others, there is still a Christ that softens me.

Amidst all the righteous anger and just sorrow for kids suicidal over being human, I heard Jesus saying, “forgive them, for they know not what they do.” And I think that even when we “do” — we don’t. And they are the most compassionate words to hear from a human God on a cross who is being slaughtered by very intentional people helplessly steeped in their fear and shame.

I choose to believe so.

And suddenly there is compassion and thankfulness and a love for the whole journey of life. It is not without its wounds. Even resurrection bears them.

But there’s no bridge for bypassing crucifixion.

We do not know what we do to one another, and even when we do, we don’t. How gentle, kind and compassionate are the eyes of the son of man who ultimately declares his murderers: unaware?